Freight rates for containers from Asia to northern Europe fell slightly this week as carriers "hoarded" inventories built up ahead of the Lunar New Year holiday.The Baltic Freight Index (FBX) for a 40-foot container from Asia to Northern Europe stood at $8,308 on Tuesday, up from $8,430 a week earlier. 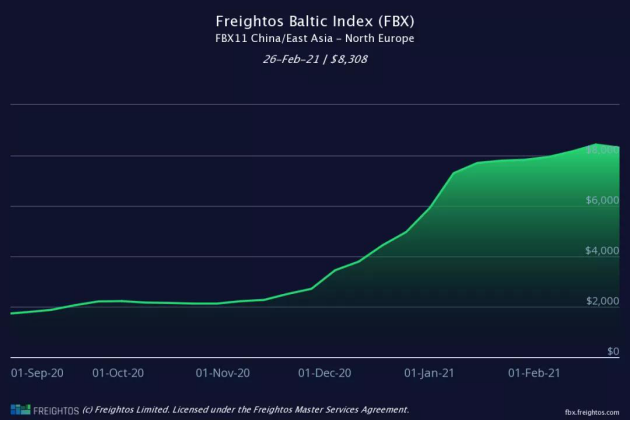 However, rates from Asia to the US are rising again.FBX spot rates for Asian to Mediterranean ports edged up $74 to $7, 967 per 40 feet. 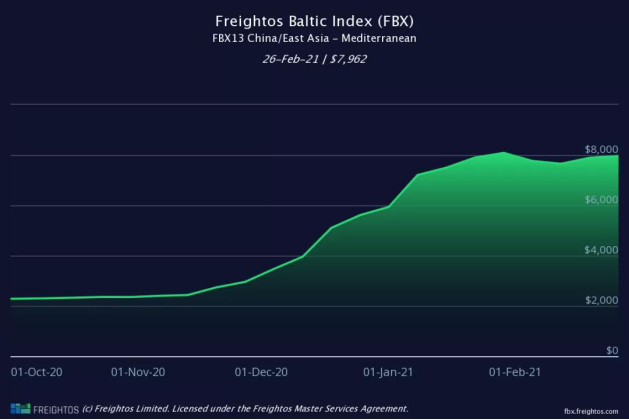 However, freight rates in northern Europe and the Mediterranean are now a staggering 400 per cent and 325 per cent higher, respectively, than they were a year ago.

Early last year, shipping companies canceled as much as a third of their main east-west routes in response to the outbreak in China.At the time, despite the aggressive introduction of blank sailing schemes by shipping companies, ship utilisation rates fell to around 70% in Europe and 60% in the US, putting enormous downward pressure on rates.

But a year later, the outlook for shippers is very different, with major shipping lines preparing to introduce peak season surcharges (PSS) four months early.In fact, Hapag-Lloyd announced that it will charge $875 /TEU for PSS on routes from the Far East to Northern Europe starting March 1. The early introduction of peak season surcharges (PSS) is further evidence of shipping companies’ confidence in their booking visibility in the second quarter. 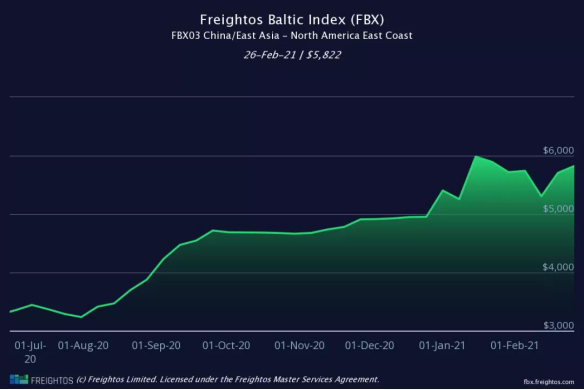 "The U.S. demand for sea-based imports continues to overwhelm the two important ports of Los Angeles and Long Beach," said Freightos Director Judah Levine, noting that Gene Seroka, executive director of the Port of Los Angeles, estimated it would take a month to clear the backlog of ships at anchor.

According to Signal, a platform based at the Port of Los Angeles, as of Tuesday local time, there were 17 ships at anchor for an average of 7.7 days.There are 13 ships waiting for pre-anchoring.It's less than the previous period.

Comments Will show after approval
Thank you!
OK
Report this news
Malicious Attack
Marketing Advertisement
Illegal Information
Others
Submit Review
Thanks for your reporting.
We will check it accordingly.
OK
top
please sign in first.
SIGN IN REGISTRATION